If you suspect it, report it 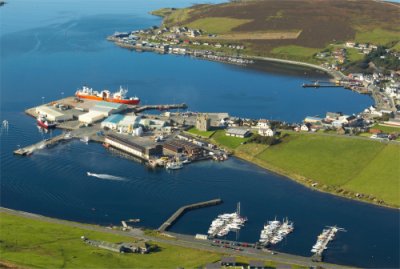 Scalloway, the ancient capital Shetland until the 17th century, provides a storm-proof harbour and everything a visiting boat requires. The harbour is sheltered from all wind directions by Trondra and Burra and can be accessed at all states of the tide. When arriving in Scalloway the main place to berth is the Scalloway Boating Club pontoon at Port Arthur, but the area offers 3 alternatives: the marina at Port Arthur, the marina at the head of the East Voe and the main pier, Blacksness.

Approaches and harbour are well lit with various navigational aids to make entry and departure safe and easily navigable.

For the most accessible onshore facilities including toilets, showers and laundry visit the boating club, For waste oil disposal visit Blacksness Pier and the handy pontoon berth for fuel and ship chandlery.

The Scalloway Boating Club pontoon and the Port Arthur Marina are particularly handy with the Boating Club, which extends a legendary welcome and holds an annual regatta.

Next to the Castle is a New Museum depicting the history of Scalloway and the saga of the wartime 'Shetland Bus’ operation based here from 1942 - 1945, when Norwegian fishing boats which sailed to Shetland from German-occupied Norway, bringing refugees to safety and returning with ammunition and resistance fighters.

Also on the main street is the family run award winning Scalloway hotel which offers a menu featuring locally caught seafood and local produce. As well as well stocked shops, a post office, a butcher, and hairdressers.

The illegitimate son of King James IV, Robert Stewart, became Earl of Orkney and Shetland in the late 1500s. He died in 1593 and was largely unmoored due to his corrupt rule disregard to local laws and traditions. He was succeeded by Earl Patrick Stewart who was no better and was executed for treason in 1615. During his reign he had slave labour build the Scalloway Casle, the four storey main block and a wing of which still remains and dominates the harbour. Inside a display explains its history.

Scalloway is also the best base for visiting Law Ting Holm, the site of the Parliamentary gatherings or ‘law tings’ during the 12th and 13th century. Situated on an islet at the North end of Tingwall loch linked to the shore by a causeway, around 3 miles inland from the village.