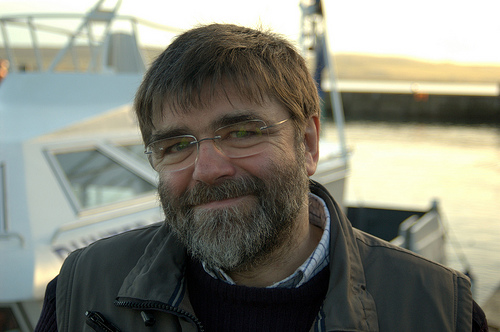 Jonathan Wills has published a wide variety of books including history and children's stories.  He is also the author of Innocent Passage: the wreck of the tanker Braer, which is an investigation into the oil tanker disaster that hit Shetland in 1993.

Jonathan in conversation with Bruce Eunson

Q:  What would you say your favourite Shetland books are?

A:  Noost, by Frank Renwick.  There's no contest really.  It's the only really successful and funny Shetland novel.  His later ones weren't as good, I think that's my favourite.

Q:  You made references to Norway in one of the stories you read, do you see Shetland writing as having much in common with Scandinavian literature?

A:  I have to admit I've not read much Scandinavian literature.  An Enemy of the People would be a favourite, by Ibsen.

Q:  What about Scottish Literature?

A:  I admire some writers who live in Scotland, George Rosie for example, I'm quite keen on.  I'm a reluctant fan of Hugh McDiarmid, though I didn't like him very much when I met him.  I'm a great fan of Norman McCaig's.  So I would think my influences are more Scottish than Norwegian.  Although like everyone else, I've been infected with the enthusiasm for Vikings.

I don't look to a golden age of Shetland literature where we had Shetland writers writing about Shetland things, I think that's too small.

We haven't produced a George Mackay Brown, (laughs) but maybe only Stromness could do that.

Q:  What about Shetland's poetry?

A:  There are some poets working in dialect who are superb.  I'm thinking of Christine de Luca.  I love her stuff.  I think Gordon Dargie, who's been a Shetland resident for many years that he cares to remember but comes from Lanarkshire.  I think his book of poems A Tunnel of Love is stunningly good, really exceptionally wonderful.

Some of my favourite Shetland literature is old stories on tape which have now been transcribed, like Tom Tulloch, Laurence Tulloch's father.  He had a natural feeling for language and for timing.  Bobby Tulloch could do it as well, and that's what I have tried to emulate in my own writing, that natural voice, without any artifice or fancy words.