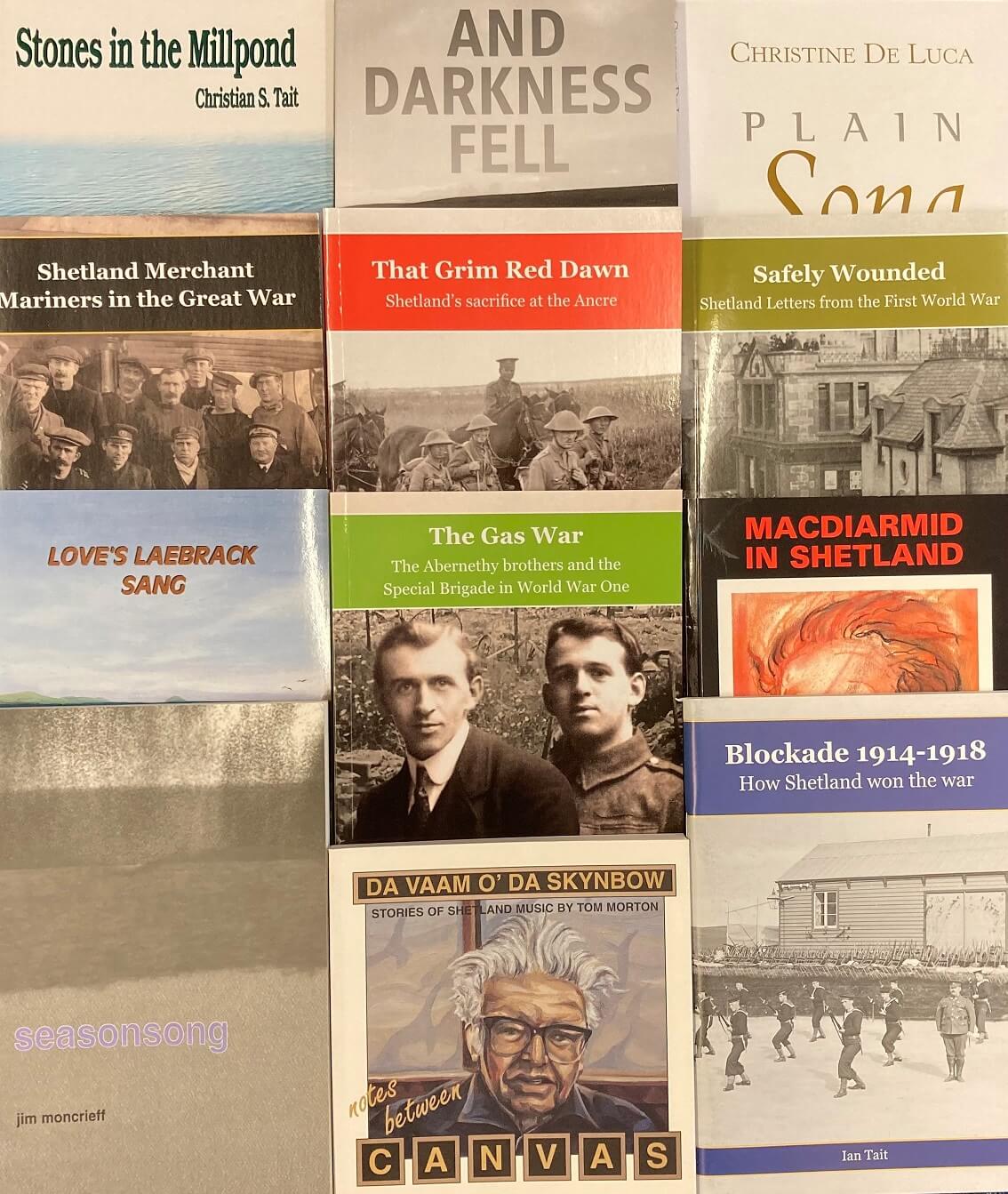 * To buy our publications online use the link below

by Christian S. Tait
Lerwick, Shetland, 1917. The Jacobson family has known grief and loss in this long war, and welcomes back their son Jamie to convalesce. But Jamie has a secret—an inner darkness that could destroy them. Christian S. Tait brings the history, dialect and society of wartime Lerwick to life in this dark and compelling family saga.
Fiction; 352 pages; paperback; ISBN 978-0-905924-64-9
Published by Shetland Library, November 2018, RRP £8.50.

That Grim Red Dawn: Shetland’s sacrifice at the Ancre

by Jon Sandison
Over 1,600 men with Shetland connections served in the army during the First World War. Casualties were constant during four years of conflict. The worst concentrated loss occurred on 13th November 1916 in the final phase of the Battle of the Somme, when 22 Shetland men lost their lives. This is the story of that day and the devastating impact in had on a community.
Non-fiction; 96 pages; paperback; photos; ISBN 978-0-905924-63-2
Published by Shetland Library, November 2018, RRP £5.00

by J. Laughton Johnston
At least 1755 Shetland merchant mariners served in the Great War, of whom some 78 lost their lives in action. This is the first account of their ships, their fates, who they were and where they came from.
Non-fiction; 96 pages; paperback; photos; ISBN 978-0-905924-62-5
Published by Shetland Library in October 2018, RRP £5.00

The Gas War: The Abernethy brothers and the Special Brigade in World War One

by Graham Johnston
This is the story of two Shetland brothers, ordinary soldiers in Britain’s gas unit, the Special Brigade. Their service at the Somme is set in the wider context of the gas war as a whole. Long after Charlie died, his son found his war diary, which is at the heart of this story.
Non-fiction; 96 pages; paperback; photos; ISBN 978-0-905924-61-8
Published by Shetland Library 24 August 2018, £5.00

Launched in February 2009, the Bards in the Bog project displays original poetry in Shetland's public toilets. 24 of the first poems selected by Jen Hadfield were published in a book to celebrate the project. It was launched on 19th November 2009 - World Toilet Day - and all profits were given to WaterAid to build school sanitation blocks. There are still a few copies available for sale.

108 pages, illustrated, softback.  Tom Morton is a writer, broadcaster and spare-time crofter based in Northmavine, Shetland.

The author's second volume of poems in English and Shetland dialect.  In 1996 she won the Shetland Literary Prize with her first poetry collection Voes and Sounds.

78 pages, softback.  Jim Moncrieff's poetry, written over a span of thirty years, has only recently begun to be published in 'The New Shetlander' magazine.  This first collection contains some of those poems, as well as one or two older personal favorites.  However, the majority of the poems are recent writings which reflect on landmark moments from his life and the vagaries of the Shetland seasons which blur the edge of change.

83 Pages, illustrated, softback.  Christopher Grieve, "Hugh MacDiarmid", spent nine tremendously creative years in Whalsay in Shetland, with Valda his wife and Michael his son.  In spite of poverty, ill-health and isolation MacDiarmid wrote half his life's work there. This book, the first devoted exclusively to MacDiarmid's Shetland period, gives vivid glimpses of the poet and his family.  It draws on letters, poems, photographs and personal impressions.  Much of it is based on material gathered from the Grieves' friends, and the island folk they lived among. It throws new light on a complex and controversial figure widely regarded as one of the greatest poets of the century.

Shetland has produced fine poets during the past century, and the late Lollie Graham was one of the best of them.  He used poetry to celebrate what was admirable in Shetland and the world. Lollie Graham was born in Stromfirth in 1924.  When he was two, the family moved to one of the new croft holdings at Veensgarth, Tingwall.  He taught at the Anderson Institute, Scalloway Junior Secondary and finally as headmaster of Gott Primary School.  He was a part-time crofter most of his life. He was Joint Editor of the New Shetlander 1956-1988, editor of Shetland Crofters 1986, co-editor of MacDiarmid in Shetland 1992, Hjaltland 1993, and A Shetland Anthology 1998.

This selection reflects in humorous, serious and satiric vein some of the highlights (and low points) of life here last century: it's joys and sorrows, its characters and comedies, and its many echoes that still haunt us from the past.

Stones in the Millpond

Christian S Tait was born (1940) and brought up in Lerwick, and was educated at the Anderson Educational Institute, then Aberdeen University and the Open university.  She married Harry in 1961 and they moved to Trondra with their family in 1975.  After teaching music (Primary and Secondary) in Lerwick from 1967 to 1987, she became a Primary Teacher and taught at Hamnavoe Primary School.  She began to write in 1987 and retired in 1995 in order to have more time for writing, music, gardening, family and friends.  This, her second book, is her personal response to family letters written from the battle-fronts of the First World War.

64 pages, illustrated, hardback.  This is the third collection of poetry in English and Shetland dialect by Christine De Luca.  She continues to draw on her Shetland heritage whilst exploring language in general.