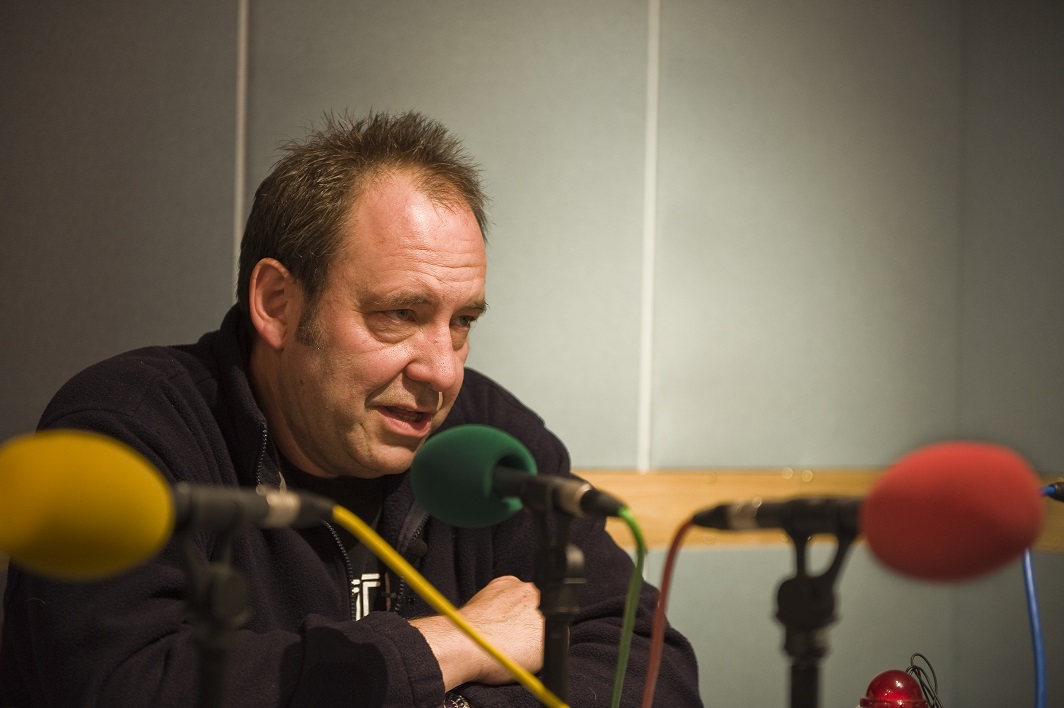 Tom Morton is a writer and broadcaster who has published a variety of fiction and non-fiction.  His books with a Shetland setting include Da Vaam o' da Skynbow: stories of Shetland music and the novel The Further North You Go.

Even bad people are allowed to love books - text of a speech Tom gave at Shetland Library on 30 April 2014.

Tom reads from The Further North You Go (audio clip)

Tom in conversation with Bruce Eunson:

Q:  What is your favourite Shetland book?

A: I would say my absolute favourite would have to be Thin Wealth by Robert Alan Jamieson.  It's a real masterpiece, probably the Shetland masterpiece of modern times.  There are older books which are perhaps equally good in literary terms but for me it (Thin Wealth) captures an era so beautifully and an era which was when I first came to Shetland, the late 1970s, when the oil industry was really making a huge impact and everything was changing - socially, culturally and economically in Shetland.  I think he captures that absolutely beautifully.

What I love about Thin Wealth is that it opens up Shetland to a universal audience.  It's a classic not just of Shetland Literature in other words, but of world literature.  It's something that's acceptable or as accessible to somebody in America or Japan as it would be to somebody here and I think that's the beauty of it.  I think it was Mark Twain who said you had to be pungently parochial to be universal, and I think that Alan's succeeded totally in that.

Q:  Do you think that's there's a particular Shetland quality to the writing or is it just that it's talking about Shetland?

A:  There are Shetlandic qualities to the writing but I think the beauty of it is its insight, which comes from distance as well as local knowledge.  The fact is that I don't think Alan has lived in Shetland for perhaps 30 years and I think that removal gives him a perspective.  As far as Thin Wealth is concerned, in that particular instance, at that time he wouldn't have been out of Shetland long but it's enough to give him a sense of both knowledge... maybe a degree of regret, but an objectivity and an ability to be objective which perhaps wouldn't be the case if he still had to worry about which people he might knock up against on Commercial Street.

That's something that's affected me, there's no two ways about it, that I would have written more about Shetland if I wasn't here and I didn't have to worry about offending people.  Not that I set out to be deliberately offensive, but I think you do have to respect people's privacy.

Q:  Is there anyone else you'd like to mention who's writing you enjoy?

A:  I like Jim Mainland's poetry.  I think he's taken a whole host of major 20th and 21st Century influences and focussed them on Shetland in a way which is joyously poetic.  I think his insights into the way people treat each other and also, into Shetland history are just so fantastic and I think he does it in a wonderful contemporary way.  He's also very interested in thing that I'm interested in, like pop music.

Q:  Do you see the writing that has come out of Shetland as being particularly imaginative? Either in it's own right, or in a more universal sense, in terms of it's ability to produce something new or go beyond the boundaries of genre or ideas of poetry?

A:  That's a hard one to answer, I think there are issues with Shetland and its literature and it's very interesting to compare it with Orkney, in that Orkney has had a long standing farming and middle class which has been able to produce an audience for literature which I don't think existed so much - I mean written literature as opposed to the telling of stories, oral culture - I don't think it existed so much in Shetland.  I think Shetland writers tend to get too caught up in the landscape, it's a very easy thing to do becuase it is overwhelming and it's all around you and I think that can be a bit of a problem for them.  I think the issue of causing offence is another one which causes limitations on the way people write but that is the price you pay, undoubtedly for living and remaining comfortable in any small community.

There are lots of difficult things about living and writing in Shetland.  People idealise it, even people who live here idealise Shetland.  People in Lerwick are particularly guilty of that; they fantasise about what life on an island is like when in actual fact they're just living in a small Scottish town, a small Scottish port town admittedly.  But the life of the rural Shetlander is sometimes idealised I think, by people who basically are urban. There's a myth too of Shetlandic superiority, the notion that Shetlanders are nicer, better, somehow.  You find that in a lot of small communities.

Q:  How do you think the role of dialect has helped or hindered Shetland literature?

A:  I think it's a really valuable thing.  My children have grown up here speaking dialect, but to an extent then rejecting it, though they can effortlessly switch between the Shetland dialect and the Glaswegian/West of Scotland form of speech that both my wife and I have.  I feel a lack in not speaking dialect perhaps but on the other hand I don't like the idea of incomers coming here and pretending to be able to speak dialect, I hate hearing that in the street, or people pretending to be Shetlanders, putting it on for a kind of funny effect, I hate all that.  I love to hear the different dialects, the fact that it's not just one dialect.  I think that's a danger actually, that people turn Shetland dialect into the one thing, when it clearly isn't.  I think efforts to preserve anything like that, just as in Gaelic, can backfire in some ways, you can turn it into a language, which I don't think ever was, I don't think it ever was a written language and I think some people can become a bit over-defensive.  I think it pays for it to develop new influences, it's not necessary to defend it in that way.

Poetry can function very well in a local setting, there is the infrastructure now, in terms of both performance and publication for local poets in local dialect to flourish but you have to work out in your mind what you want to do with your gifts and if what you want to do is communicate with a local group of folk, the people round about you, and to sustain that community then that's great, but if you want to communicate a wider notion to the wider world then you have to modify the dialect in order to make it accessible, or even just writable.  I think that both Alan Jamieson and Christine de Luca have done that, because I don't think that what they do is really the kind of dialect you'd hear spoken in schools, it is more kind of modified for literary reasons.