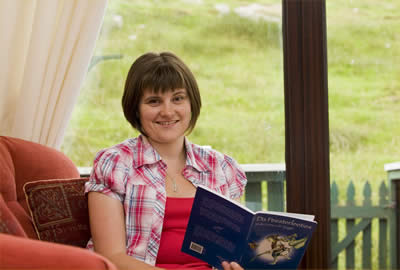 Valerie Watt writes children's books in dialect, taking inspiration from Shetland's trowie tales for her book Da Peesterleeties and Da Curse o Da Njuggle.  Her heroine in Peerie Mootie an her Muckle Buits, however, is a fairy!

Valerie reading from her own work (audio clip)

Valerie in conversation with Bruce Eunson

Q:  You read the Vagaland poem Eence Aapon A Time because it was the source for your character's name - what other details from Shetland sources have brought inspiration to you?

A:  The extract I read about the trows flying on 'bulwaands' is something that hasn't been heard about much recently and a lot of folk thought I made it up, when in fact it came from old folk tales.  Trows were known to fly on docken leaves in the same way as witches fly on broomsticks.

A lot about their appearance I took out of old folk tales, about how they look and how they live, what their 'howes' or 'knowes' are like, and the way that they like to collect silver and steal from humans.

Jacqueline Nicolson did the illustrations for my book and her work was a great influence on me.  I suppose I first got introduced to trows through being a fiddle player.  I was a pupil of Tammy Anderson's and I played in Shetland's Young Heritage with Jacqueline.  She did illustrations for some of Tammy's fiddle books that had trows in them and as I was growing up I used those books everyday.  That imprinted in my mind Jacqueline's interpretation of a trow, so she was a perfect choice as an illustrator.  Tammy always instilled in us the importance of learning the stories behind traditional tunes so I think that is what first got me interested in Shetland folklore and culture.

Q:  Are you planning to write any more trowie stories?

A:  I have to admit I'm a bit trow-ed out!  After finishing the Peesterleeties I started doing a column in The Shetland Life called Trushie-Truncherface and when I started it I said I would do it for a year but now I'm into the third year of it!  Saying that though, I do have a plot for a sequal to The Peesterleeties and I did make a start to it but I've not got much further.  Peerie Mootie, my second book, kept me very busy going around nurseries and schools after that was launched.  At the moment I'm working on another dialect children's book.  It's very different from the first two and may appear sometime next year...

Q:  Finally, do you have any favourite Shetland writers?

A:  I enjoy reading most Shetland poetry and prose and don't have any particular favourites.  I've recently read an excellent children's novel set in Shetland that I would recommend called Tarantula Tide by Sharon Tregenza.  Any Benny Benny Seawater by Lisa Johnson and illustrated by Katherine Laidley is a favourite at bedtime in our house.